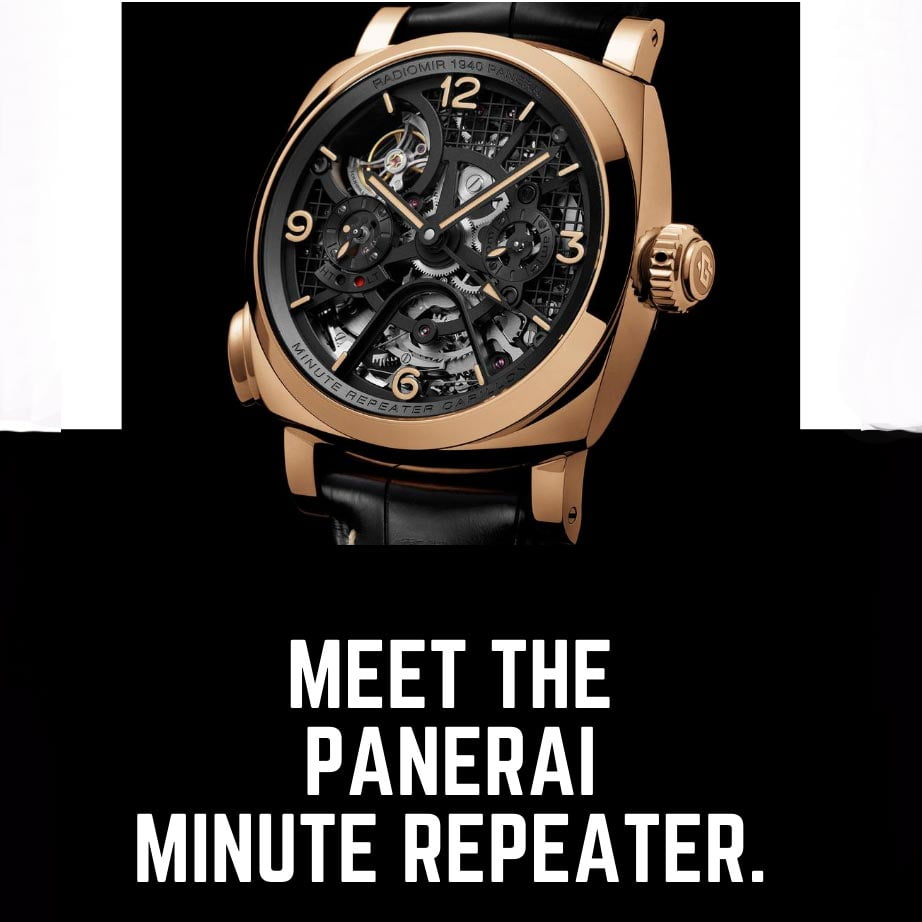 FROM OUR PASSION FOR FINE HOROLOGE AND WATCHMAKING, WE WANTED TO EXPLORE AND SHARE THIS SPECIFIC MECHANISM, THE MINUTE REPEATER, WITH YOU.

This is what makes us so passionate about timepieces, they are truly a form of art!

The minute repeater mechanism is one of the most noble complications of high quality watchmaking, fascinating for its unique characteristic of making use of sounds to convey the time.

The new Radiomir 1940 Minute Repeater Carillon Tourbillon GMT is no exception. Listening to the time is made more immediate by the presence of three gongs which give life to the harmonious sequence of the carillon.

The intermediate stroke of the ten minutes and the possibility of choosing whether to activate – with a simple gesture – the sounding of the local time or of a second time zone make the function more current and contemporary.

Above all, Panerai never gives up on arousing emotion to keep alive the passion of its fond collectors. In this case, it has done so not only thanks to the design which evokes immediately the history of the brand, but also thanks to the crystal clarity of a carillon which evokes, for those who know how to dream, journeys into space and time, even on board a wonderful vintage yacht on which a ship’s bell sounds.

These various indications are obtained by means of three hammers striking three different notes, whose combination generates a particularly harmonious sound, similar to the ringing of a bell. The creation of a minute repeater watch which chimes ten-minute periods instead of fifteen-minute ones, as is usually the case, allows Panerai to distinguish itself by simplifying and making more immediate the calculation of time. One of the most remarkable features of this high-end timepiece is the possibility of selecting the time to be chimed by choosing between home time and local time.

Thanks to the sapphire crystals placed on both the front and the back of the case, the new P.2005/MR calibre, completely developed by the Panerai Manufacture in Neuchâtel and finely skeletonised, can be admired. This movement has a tourbillon escapement, whose cage rotates on an axis at right angles to the axis of the balance wheel, and which makes two rotations per minute: this rotation ensures greater accuracy, providing the best compensation for the irregular rate caused by the effect of the force of gravity.

The chiming, activated by a push-piece at 8 o’clock, is carried out by three gongs.

The choice of three gongs, instead of the traditional two, enables three different sounds to be combined, so that the carillon can play a melody, like that of a bell. As is traditional, the first is the lowest and identifies the hour, while the last and highest indicates individual minutes.

The unique feature is that the second gong sounds triple chimes of an intermediate note, each triple chime corresponding to ten minutes instead of the traditional fifteen.

An example will help to describe the operation: in an ordinary repeater, the time of 10:28 is usually indicated by ten chimes for the hour, a different chime for the quarter of an hour and thirteen individual chimes for the minutes.

In the Panerai’s Minute Repeater Carillon, however, the sequence consists of ten chimes for the hour, then two triple chimes (the two ten-minute intervals) and eight single chimes. The system of tens, reducing the number of chimes, makes telling the time easier and quicker, and it also corresponds to the customary way in which time is now indicated by contemporary watches.

The quality of the sound propagated by the minute repeater is also enhanced by the specific qualities of the red gold of which the case is made and by its structure, being formed of two parts created separately and then soldered together. This construction enables the empty spaces inside the case to be optimised in order to enhance the quality of the sound.

The hand work, by master watchmakers, gives the sound of each individual watch a unique character, similar yet imperceptibly different from each other.

One of the most remarkable innovative features of the Panerai Minute Repeater Carillon is the fact that the repeater function can be activated both for local time and for a second time zone, which is indicated on the dial by the central arrow hand and the AM/PM indicator on the counter at 3 o’clock.

In this case too, the simplicity of selection and of activating what is, in essence, a double hour and minute repeater mechanism, is impressive and the device is designed to protect the movement from the risk of any damaging.

By pressing on the winding crown push-button, the indicator at 8 o’clock (red dot) moves to show which time zone will be chimed. The red dot indicates which time zone the chimes will sound (Home Time/Local Time).

Share
Need Help? Chat with us
Start a Conversation
Hi! Click one of our member below to chat on Whatsapp
The team typically replies in a few minutes.
Grand Timepiece Website
GT Team Member
I will be back soon